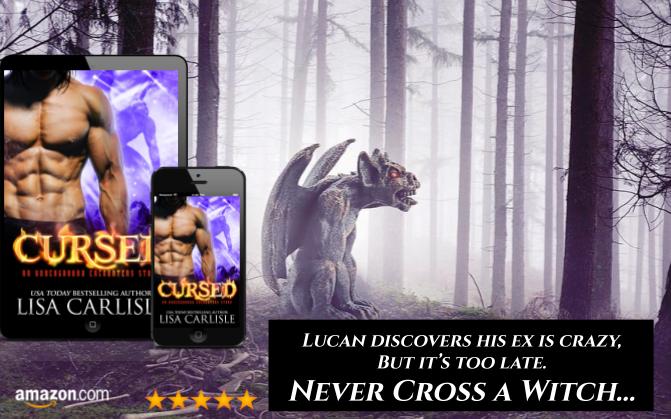 Here’s a snippet from my new release, CURSED:

Lucan stopped and turned at the sound of Veronique’s furious accusation. She strode out of the forest, eyed red-rimmed and burning with fury.

His pulse quickened. What had she heard?

“Veronique, what are you doing here?” He spoke in the calmest voice he could muster.

Danton and Mattias mumbled in low tones behind Lucan. Mattias muttered something like, Looks like somebody’s in trouble.

She strode toward Lucan with quick steps that made the fabric of her dark emerald dress rustle. “You think this was all a joke?” She waved her hand in a circular motion. “Some fun and games until you got tired and decided to go in search of a new toy?”

“No, of course not.” He opened his arms wide, turning his palms up.

“What now—you’re bragging to your brothers of your latest conquest?” She spat.

“Before you go off to find a new one.”

“You misunderstand,” Lucan attempted to placate her.
“Come now, Veronique, and let’s talk.” That was another problem. What could he say that he hadn’t said several times already?

“I’ve heard enough of your words. Lies.” She pointed at his chest.

“It’s not like that at all,” Danton added from behind Lucan.

“Back off!” She snapped at Danton. She turned back to Lucan and curled her fingers in. “I can silence your lies.”

“Hold up,” Mattias countered with a raise of his hand.

Gray smoke funneled from her fingers, followed by fiery sparks. It quickly swelled and swirled out like a charcoal tornado etched with streaks of fire. She hurled the growing mass at Lucan before he could even protest or try to block the magic.

2 thoughts on “A Teaser from CURSED!”