This week for My Sexy Saturday, I’m sharing seven paragraphs from Temptation Returns. 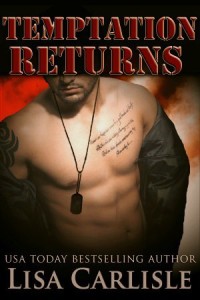 5***** – “…I honestly LOVE LOVE LOVED it. It was cute, sexy, heart pounding, sad, emotion. It was a great story, with believable characters. Real life situation, and a true ending.” –Booklovinjunkie

Free for Kindle Unlimited subscribers to read
Or buy now at: Amazon

Seven Paragraphs for My Sexy Saturday

Lina couldn’t respond so she nodded, unable to tear her eyes from him. Three years had passed, but he appeared as young and as vibrant as when he was a teenager. His black hair was shorter than when they’d first started dating, but not as close cut as while enlisted in the Marines.

His eyes still conveyed a sense of amusement and burned with an intensity that could render women speechless, including her when they’d first met at a club like this one. His body was leaner than when she’d last seen him; he’d lost some weight that further defined his muscles. He resembled a boxer more than a bodybuilder. The whole package was one she’d never been able to resist. A sucker for dark, brooding Italian boys, he captured it so well he should have been on tourist brochures. It would get her on the first flight to Italy.

Lina’s mind scrambled. “I don’t know what to do.”

He must have felt her eyes staring as he turned her way and caught her eye. She froze, unable to break the stare.

Visit the other stops in My Sexy Saturday this week!