Sometimes, it all comes down to timing…

Volunteering at a cat shelter is much calmer than the adrenaline-fueled skirmishes of Vivi Parker’s last deployment in the Marines, but her limp is a constant reminder of what she endured. The shelter is her sanctuary, her one relief from memories that haunt her. At a fundraiser, she runs into a man she could never have while she served, but had never forgotten.

Active duty had its challenges, but starting over as a civilian in Boston is more difficult than Jack Conroy anticipated. When his mom and sister drag him to a cat benefit, he never expects to see a woman he last saw wearing Dress Blues.

Vivi fears she’s no longer the woman Jack was drawn to, able to tackle rock climbing walls or other outdoor challenges. And Jack has decisions he must face.

Yet, so have they.

Is it ever too late for a second chance at love?

Read in Kindle Unlimited or buy now at Amazon

The evening was going swimmingly. Vivi chatted with attendees and other volunteers about the cats and smiled whenever someone oohed and aahed over how adorable they were.

She froze. Holy shit. It couldn’t be him. Not here. Not now.

It could. And it was.

She blinked. She wasn’t fantasizing about this. This was the real, earth-shaking deal.

Although her initial reaction was to flee, her body responded in a different, pulse-rising way. Traitor.

He was still fine. No, better than fine. In a suit, he didn’t appear stuffy at all; more like sinfully delicious. He stood over six feet tall, and his chiseled face was clean shaven, as she’d always seen him, but he’d let his hair grow in a couple of inches. He no longer sported the high and tight Marine haircut. The new hair style made him even sexier. Ooh, she could run her fingers through the sandy brown strands…

Sure, his date would love that.

Figured he’d be with some gorgeous blonde. Her pink chiffon dress showed off her killer body. In her spiky heels, she was only a few inches shorter than Jack. Ugh, she probably had legs as tall as the John Hancock Tower.

Oh no, they were walking in her direction. Must escape. Where to? She couldn’t duck under a table. And she couldn’t abandon her station, running away like a cat with its tail between her legs. Oh great, now she’d resorted to cat clichés.

If you turn your head, he might pass by unnoticed.

Read in Kindle Unlimited or buy now at Amazon

Dress Blues is the second novella in the Recalled to Love series, but each can be read on its own. Read more now. 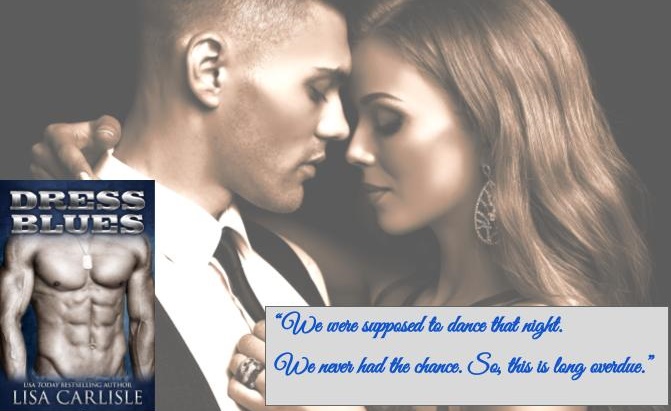 To celebrate the release of Dress Blues, I’m giving away books and swag from multiple authors. It’s easy to enter!