Lisa Carlisle Posted in Books, Knights of Stone — No Comments ↓

“Well now, I have decided that I want to visit this mysterious isle as often as possible, I love the mystical ambiance, the sexy gargoyle brothers (kilts…need I say more?) and fascinating world which held me hostage from the very beginning, although I do have to say that I wish it had been longer because I wasn’t ready to leave.”

So happy to read this. I love this series and it’s main focus in 2016. 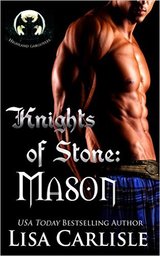 “Kayla and Mason fall in love despite their differences, despite being different. It is a new way of telling Romeo and Juliet. You cannot be with them because of something their ancestors did, and the kids saying I do not care about that, I want to be with them regardless. A lesson many of us need to learn. I would recommend this book to anyone wanting something a little different from their normal.”
~ 5* from Books and Beyond Fifty Shades

“I love a paranormal book that has multiple beings, in this book there are Gargoyles, witches and  wolf shifters. The plot has twists and turns taking you through such a unique and mysterious world… Great story, great characters… Very unique!”
~ Up All Night, Read All Day Book Reviews

Read more about the series at https://lisacarlislebooks.com/books/highland-gargoyles-series/