Lisa Carlisle Posted in Books, Knights of Stone — No Comments ↓

I’m very excited to share the news about an upcoming release. Knights of Stone: Lachlan is finally available for preorder!

As the new alpha of his gargoyle clan, Lachlan takes on a leadership role at the historic peace talks between the wolf shifters and tree witches. Cooperation is crucial to their survival. The magical veil over the Isle of Stone is weakening. But unity is hard to achieve when tensions are running high. So is Lachlan’s concentration when a sexy wolf shifter rushes to the talks. Her wild beauty is mesmerizing.

Raina has her hands full with pack problems, from pack mates succumbing to blood lust to animosity toward her species. The source of her problems is clear-the gargoyles. If they hadn’t lured the humans to the island with their unconventional rock concerts, she wouldn’t have to deal with the fallout. She wants nothing to do with them, especially their alpha. His not-so-surreptitious glances are hard to miss. Nope. Not the kind of attention she needs. She’s heard rumors of the rebellious, attention-seeking rockers–and of their endless string of females.

But when humans come to investigate the wolf attacks, Lachlan and Raina must work together to coerce them off the island. And time spent together sparks a forbidden attraction. If unexpected love were their only problem, they’d be able to deal with it. It’s not. Time is running out, for them and their island.

If you haven’t read the first book in the series, here’s part 1 with Mason’s story. There are five hot gargoyle shifter brothers in this series and I’m greatly enjoying writing about them. 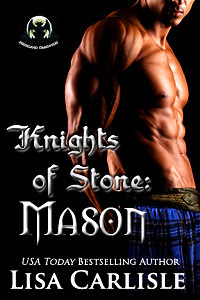 “Kayla and Mason fall in love despite their differences, despite being different. It is a new way of telling Romeo and Juliet. You cannot be with them because of something their ancestors did, and the kids saying I do not care about that, I want to be with them regardless. A lesson many of us need to learn. I would recommend this book to anyone wanting something a little different from their normal.”

~ 5* from Books and Beyond Fifty Shades

“I love a paranormal book that has multiple beings, in this book there are Gargoyles, witches and  wolf shifters. The plot has twists and turns taking you through such a unique and mysterious world… Great story, great characters… Very unique!”
~ Up All Night, Read All Day Book Reviews