Welcome to Lizzie Starr. Lizzie is sharing an excerpt of Wild Keltic Carouselle. 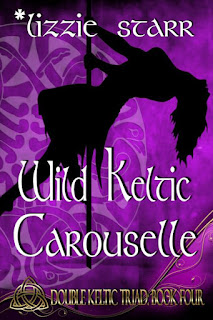 Just when Bryce decides to give up looking for the masked dancer who captured his heart and get on with his life, his darlin’ daughter climbs onto the lap of a captivating woman in a coffee shop and calls her Mommy. He certainly wouldn’t mind exploring the possibility.

Carrie’s vacation is over. Although she loves her job, she dreads returning. Especially when a blonde-haired cherub insists she’s ‘Mommy’.  Add the girl’s intriguing father, and Carrie believes she’s finally ready for a real relationship. But memories of a horrific attack surface, bringing doubt and fear.

Then one of Bryce’s fathers is kidnapped by a cult. Not knowing if the abduction was of human or Fey origin, Bryce must chance seeming crazy and losing Carrie with tales of the Faerie Otherworld. Dare he take her to Faerie and declare his love—or are the forces aligning against them too much to overcome?

A faint pink covered Carrie’s cheeks and she glanced away. Bryce took the opportunity to study the woman cradling his daughter so carefully in a completely relaxed, natural embrace.

Her highlighted, golden brown hair was pulled back with a clip. Strands had escaped the confinement and trailed loosely around her face and down her neck. A tiny spot of whipped cream, a remnant from her beverage, hovered just above her upper lip. A shapely lip, poised above the lush, kissable pout the lower.

Her lips moved and pulled into a wide smile.

Guiltily, Bryce lifted his gaze. Chocolate brown eyes twinkled as if she fought to control some hidden amusement.

He could believe that.

“But, it’s not usually my face being stared at.”

Carrie chuckled, a low throaty sound that insisted he respond. He did, in a pure, naturally male way. His gaze dropped to her breasts. She chuckled again, her body moving against the soft material of her shirt.

The Sahara Desert would seem lush and tropical in comparison to the sudden dryness in his mouth. Her breasts were—perfect. Neither overly large, nor small enough to need padding. Nope, there was no padding there. In fact, if she even wore a bra, it had to be one of those soft athletic things. He could see the tantalizing, firming peak of…

This is *lizzie starr

*lizzie always made up games and stories to keep her company, so, a witch lived in Grampa’s weather research station and was only held at bay by waving a certain weed. An ancient road grader morphed into boat a carrying wild adventurers to islands filled with sheep that turned into lions and cannibals. Now, filled with fantasy and love, the stories of her imagination have found their way into the mundane world. And when *lizzie has to return to that mundane life, she’s *the Lunch Lady* at a private school. Author and lunch lady~~what a combination!

*lizzie adores hearing what you think about her tales of romance with a sparkling twist. You can visit her blog at http://starrwords.blogspot.com, her  website at www.lizziestarr.com or contact her at:lizistarr@gmail.com